Experience the timeless Flinders Ranges in style aboard the Pichi Richi Railway.

This historic railway line has been progressively restored and operated as a working museum since 1973 by the dedicated volunteers of the Pichi Richi Railway Preservation Society.

Offering full or half-day trips between Quorn and Port Augusta, this is the last remaining operating portion of the “Old Ghan” railway line.

The Coffee Pot: This unique steam motor coach is the last operating example of its type worldwide. Including a welcome drink, canapes and a 3 course lunch this is an exclusive experience for only 22 passengers.

Twilight Explorer: During March and November, relax aboard the Barwell Bull and watch the evening sun paint the ranges the colours of sunset.

Visit the website for timetables and various ticket prices for all trains.

Accredited by the Office of National Rail Safety Regulator (ONRSR) 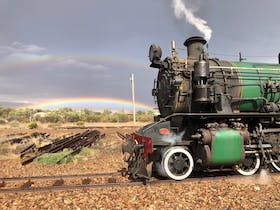 Where to find Pichi Richi Railway